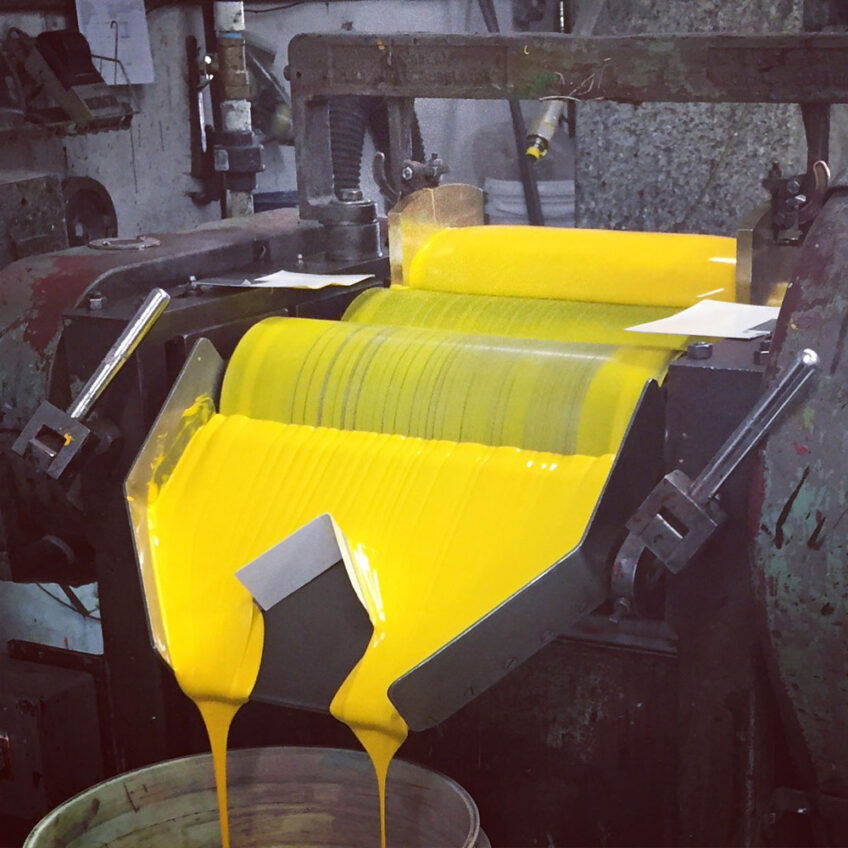 I just returned with my family from a couple of weeks in Oregon. While we were in the Portland area, I was able to visit the factories of two companies who make artists’ paint and I wanted to share some of what I learned with all of you. I’ll focus on one company in this post and cover the other next time.

The M. Graham facility is located just outside Portland and they’ve been making paint for artists for more than 20 years. They are a small, close-knit company led by Art and Diana Graham who are dedicated to making paint of the highest quality.

I was most interested in learning more about their oil colors since I’ve been using them for several years now. But I’ve also recently been trying a set of their gouache, and they make acrylics and transparent watercolors as well.

M. Graham oil colors use walnut oil as the vehicle rather than the linseed oil most other manufacturers use. Artists have been using walnut oil-based paints for centuries. A study conducted by the National Gallery in London revealed that Raphael used walnut oil in the early 1500s. The reason we don’t see walnut oil used widely in today’s artist paints may be at least partially due to the fact that it’s two to three times more expensive than linseed oil. But it has some great attributes for use in the making of paint.

Art and Diana explained to me that the properties of walnut oil allow it to carry more pigment than linseed oil, resulting in colors with greater pigment load, more saturation and better tinting strength. They really are passionate about loading their paints with as much pigment as possible. They test their colors regularly against those from other brands to make sure that M. Graham colors have the most pigment.

Another important aspect of the walnut oil vehicle is that it is known to resist yellowing over time. All drying oils are somewhat prone to yellowing as they age, but Art and Diana showed me tests they’ve done revealing that walnut oil-based colors show less yellowing when compared to linseed oil-based colors. One of their tests showed an especially dramatic difference. I’ve started some testing of my own in this area to see how much better the M. Graham colors might perform in my studio environment. Since many of my paintings are done in a high-key value range with light, delicate colors that contain a lot of white, I want to keep a close eye on this yellowing issue. But from what I’ve seen so far, M. Graham oil paint holds up very well over time.

Walnut oil also has a slower drying time compared to linseed oil, so M. Graham colors dry a little more slowly overall. I find this helpful in my studio since the piles of color on my palette stay usable longer and I don’t have to waste as much paint. But M. Graham offers a walnut oil/alkyd painting medium that speeds up the drying time of their colors for those who want their paintings to dry more quickly.

M. Graham is proud that their paints and their factory are solvent-free. They recommend that artists use walnut oil instead of solvents for thinning paint and cleaning brushes. They even use it to clean the paint mills at their facility.

Even though they’ve given me samples of their paint over the years to test, I don’t make any money for promoting M. Graham. I’m just a painter who is impressed with their products and highly recommend them. I really enjoyed the chance to visit their factory and to finally meet the staff in person after our many years in contact.

You can probably find M. Graham paint stocked at an art supply or hobby store near you. It’s also available at many online suppliers. Visit their website to see some of their color comparisons and to learn more.